Last blog I introduced “Puddin'”- the champion Rose-comb chicken–as a foil for my mushroom story about the Rose-comb mutation in fungi. This time I’m going to use Puddin’s cousin from the Turkey family to take off on a mushroom story — this one was almost the National Emblem of United States…or so the story goes.   Remember this blog is about fungi but…..six years after the Declaration of Independence was sighed the Bald Eagle was adapted as the centerpiece of America’s Great Seal.

For decades a story has circulated that the Bald Eagle was almost beat out by The Wild Turkey as our National Symbol because of the influence of Benjamin Franklin. The story goes like this: Ben was outraged that the Bald Eagle was being considered for our Great Seal and he wrote letters to the Continental Congress against it, This is what Ben said: “The Bald Eagle is a bird of bad moral character… He does not get his living honestly…he is too lazy to fish for himself…he watches the fsh hawk and when that diligent bird captures a fish the Bald Eagle pursues him and takes it from him…he is generally poor and very lousy and a rank Coward…and I should prefer the Wild Turkey…for in truth the Turkey is by comparison a more respectable bird and a true original native to America…” This story continues, in the popular telling, that by some narrow margin Franklin was out-voted and the Bald Eagle was chosen as our symbol. This makes a good story but unfortunately it’s not true and has gained the stature of legend by a convenient disregard for the facts. In truth Franklin voiced his opinions only to his daughter and a year and a half after the great Seal had already been adopted. But some stories are just too good not to tell and this story has, as they say, got legs….

Wild Turkey though does have considerable appeal.

Notice how the Wild Turkey uses his fanned out tail as a backdrop, almost like a stage curtain, to frame his fine features. Wild Turkey is not only a handsome “true Original Native of America,” to borrow Ben’s phrase, but also a true original American Bourbon Whiskey… AND 101 proof at that!. As if 100 proof wasn’t enough? Wild Turkey are probably the original source of our domestic barnyard Turkeys and the star of our best American Holiday. Every November I’m thankful we can all celebrate the bird that was almost our National Symbol with a shot of 101 bourbon, massive amounts of food and the company of friends and family…and so I’m thankful for the Wild Turkey…. and I think that now we have set the table my fungal tale of Turkey Tail.

This is one of my favorite fungi: The “Turkey Tail”. You could call it a mushroom. That’s not exactly wrong. But most people think of mushrooms as the soft-bodied umbrella-shaped things found in the produce section of the supermarket. You know what I mean, Button mushrooms, Pizza mushrooms, Shiitake, Portabella. But Turkey Tails are mushrooms too, just a different kind. They are Polypores or more commonly Bracket Fungi. Instead of being soft-bodied they are tough and leathery. Instead of having gills beneath the cap they have tiny pores. And instead of having an umbrella shape they are shaped like so many little shelves. But they have the same job as every mushroom: they are the reproductive part of the fungi:  The Fruit. This beautiful Bracket Fungus, Trametes verisicolor to scientists, the Turkey Tail mushroom to you and I, is found all over the world busily decaying dead wood and recycling nutrients. Each individual little bracket or shelf has fuzzy bands of color on the topside and tiny pores underneath. It grows in over-lapping clusters on dead trees, stumps and limbs. The common name, Turkey Tail, comes from its remarkable resemblance to the fanned tail of a Wild Turkey. Take a look at the pictures above. The Turkey Tail mushroom is the visible reproductive structure or “fruitbody” of a larger fungus that exists hidden inside the wood it is decomposing. The Turkey Tail specializes in decomposing the lignin part of deadwood which gives wood its brown colors. The other part of deadwood, cellulose, is mostly left behind for the next group of decomposers to take care of. As the the Turkey Tail consumes the brown lignins in the wood it  get lighter and whiter so mycologists call these fungi, the ones that eat lignin, the  White Rot Fungi. The Turkey Tail fungus is one of those cases where both the scientific name AND the common name make sense. The scientific name, Trametes versicolor, translates roughly to “thin shelf with bands of many colors”. One of the most appealing things about Turkey Tail is it comes in a number of different color combinations as if it can’t quite make up its mind what clothes to wear.

Sometimes the Turkey Tail palette is all earth tones, plain and simple like a humble Quaker. Other times it’s all neon electric blue like some crazy Smurf food. It’s a fungus you can keep discovering over and ove. Each individual bracket or leaf is small, less than 2 inches. They stack up on dead wood in tiers like so many little adjacent shelves… which is where they get an alternate name, Shelf Fungus. Each little leaf is thin and tough. People invariably ask “Can you eat it?”  The answer is “Well no it’s not edible unless you enjoy eating a chunk of old leather.” But there is another side to this story and that’s the story of mushrooms as medicicne. In China it is called Yun Khi  (Cloud Fungus) and in Japan it’s Kawaratake.  Throughout Asia Turkey Tail has been used as a tradition medicine and health promoting tea. The tea is made by drying the brackets, grinding them into a powder and steeping them like regular tea. It is claimed to boost the immune system, fight tumors of the liver and GI tract and promote good health. The health claims are so persistent that Western Medicine has begun to take a serious look at these healing and health promoting properties FROM A SCIENTIFIC POINT OF VIEW. In fact Turkey Tail is THE most studied wild medicinal mushroom in the world! Both The American Cancer Society and the National Science Foundation have  supported Turkey Tail studies and clinical trials to investigate the anti-tumor activity of two substances derived from the fungus. 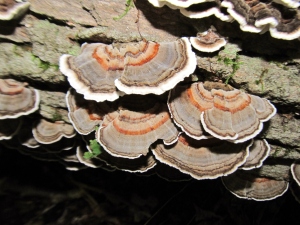 The two substances are proteanaded polysaccharides PSP and PSK beta gulcan and are actively used in Europe and Asia as supplements in cancer treatments. Turkey Tail has been studied in the US and Canada since the 1980’s and shows great promise as an addition to the arsenal of substances used to fight disease. One of the good things about this fungus is that there are no known dangers or health risks from using it as a tea. It would be easy to slip into a whole essay on medicinal mushrooms at this point but the possible health benefits from Trametes versicolor is not the subject of this essay. I wanted to bring it up and encourage readers to look into the story of Turkey Tail on their own. Be aware that because of mass communication and social media there are thousands of people, some reputable and some not, who are selling Turkey Tail and its various derivatives ON THE INTERNET. They will promise you the moon and because it’s unregulated they suffer no consequences if they sell you a bag of dirt or anything else. It’s your responsibility to be a smart consumer or to find your own Turkey Tail and make your own tea. How common is Turkey Tail? It’s everywhere in the world that has broadleaf trees. This is one of the most common and ubiquitous fungi of every forest. It’s also one of the most beautiful fungi you can find. Next time you’re out in the woods look for the Turkey Tail. It’s out there doing its job; recycling the forest.

4 thoughts on “Almost the National Symbol, Bad-ass bourbon, Bracket Fungi and A Tale of Tails.”